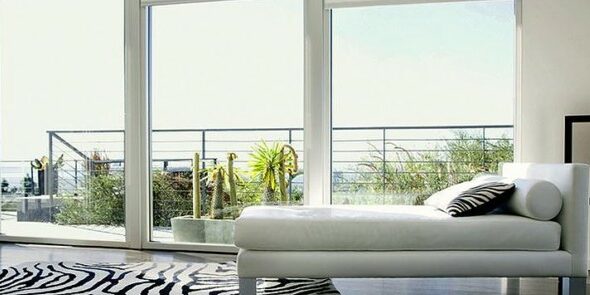 Many film fabricators offer both interior and exterior films for both residential and commercial window tinting. Why might you ask would I select one over the other? When working with either residential or commercial exterior films, the benefit of putting the film on the exterior surface allows it to reflect the Sun’s heat before it ever penetrates the glass. One could surmise that this would be much preferable to an interior film that must do its work after the sun has heated the exterior surface of the glass.

Certain climates with heavy sun exposure and little other weather deviations offer the best environment For exterior films. The downside is that the manufactures do not offer comparable warranties to those Provided with interior window films. Why, you might ask? The elements are the big reason.

Here, in Nebraska, for example, we incur a lot of wind, some hail, and a lot of freezing temps. Since these films are polyester they react to differences in heat and cold. They can harden from intense summer sun exposure, then crack for freezing cold. They can also cause stressing of the glass itself under extreme conditions. This is the reason not many window film dealers in the Midwest promote The exterior films. Most interior films carry limited lifetime warranties for residential window tinting & 10-15 year warranties for commercial window tinting. The safest bet is to always go with interior films Unless there is an overriding issue that clearly favors the exterior film. If you feel you want to explore An exterior window tinting film, talk to your dealer about the pros and cons.